By all accounts, John Laux was a model representative of the industry. John’s decade-long work in the industry was tragically cut short after a brief and hard-fought battle with cancer. He is remembered fondly by all who worked with him. PIA recognized John posthumously with its Company Person of the Year award in 1995, and to date—two decades after his death—John’s friends and colleagues continue to honor him through the Fore John Charitable Foundation, which has raised more than $235,000 for scholarships and local charities in his name since his death.

This year, the Foundation joined with PIANJ to again remember John with a special $5,000 scholarship, designated especially for the child or grandchild of a PIA-member agency principal or employee. Submissions, which included a 500-word essay about the importance of insurance, were accepted throughout the spring, and a committee of seasoned industry veterans reviewed each one, noting the quality and sincerity of them all.
“It was motivating to be a part of helping a young student who is embarking on his or her academic career. The entire committee was so impressed with every submission we received,” said PIANJ President Kacy Campion.

Renna, CIC, who worked closely with Charles Musilli of Selective Insurance to administer the scholarship. Her sentiments were echoed by PIA executive board members who participated in the process. “I wish the very best to each of the scholarship entrants,” said PIANJ past President Anthony F. Bavaro, CIC, CRM. “ ey are early on in their life journey and their choices will never be more important than now. I am so glad PIA could be a part of that.”

Lanzano, who resides in Toms River, N.J., is attending Ocean County College and plans to attend Stockton University to obtain her bachelor’s degree and become a nurse. 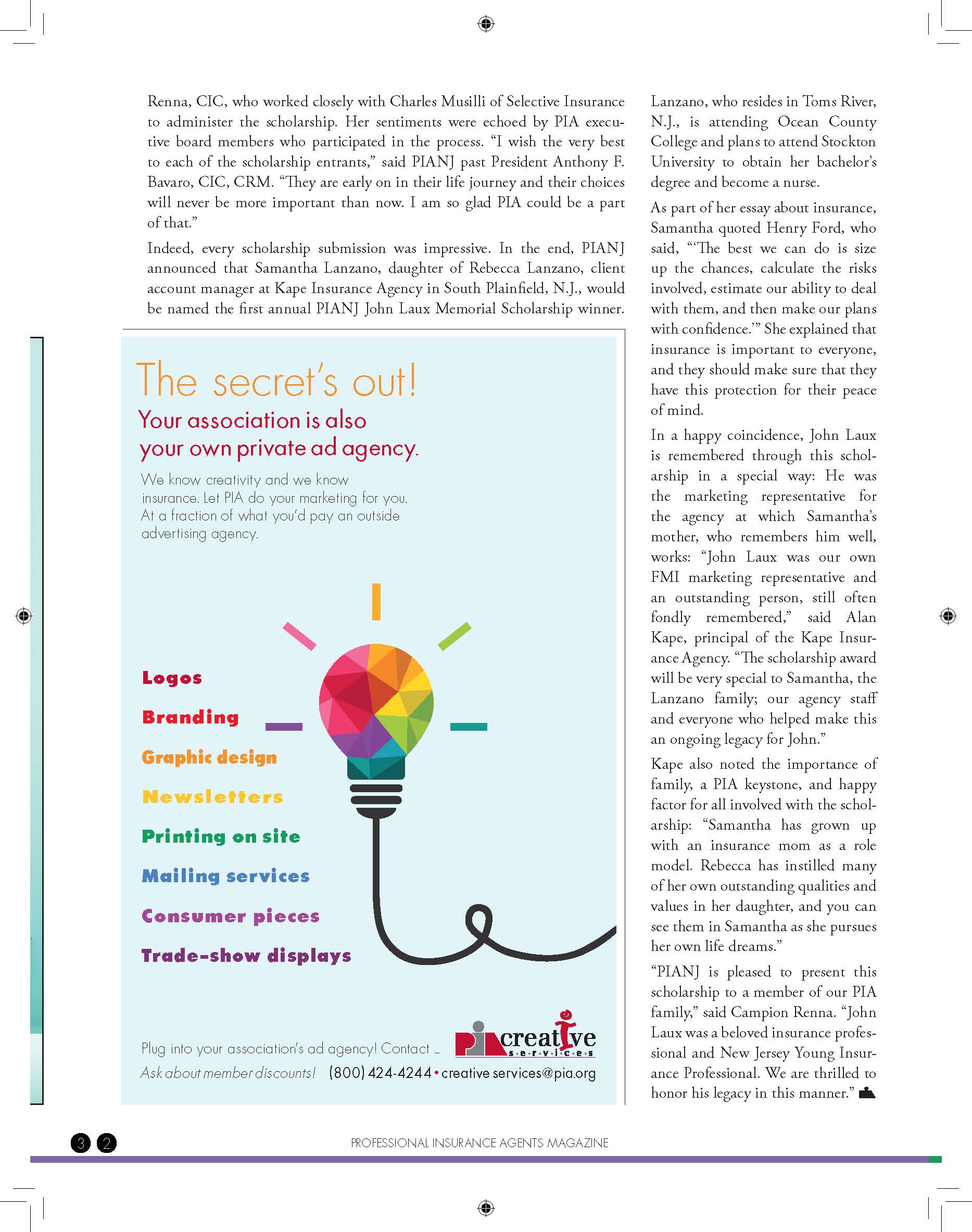 As part of her essay about insurance, Samantha quoted Henry Ford, who said, “‘ e best we can do is size up the chances, calculate the risks involved, estimate our ability to deal with them, and then make our plans with confidence.’” She explained that insurance is important to everyone, and they should make sure that they have this protection for their peace of mind.

In a happy coincidence, John Laux is remembered through this scholarship in a special way: He was the marketing representative for the agency at which Samantha’s mother, who remembers him well, works: “John Laux was our own FMI marketing representative and an outstanding person, still often fondly remembered,” said Alan Kape, principal of the Kape Insurance Agency. “ e scholarship award will be very special to Samantha, the Lanzano family; our agency staff and everyone who helped make this an ongoing legacy for John.”

Kape also noted the importance of family, a PIA keystone, and happy factor for all involved with the scholarship: “Samantha has grown up with an insurance mom as a role model. Rebecca has instilled many of her own outstanding qualities and values in her daughter, and you can see them in Samantha as she pursues her own life dreams.”

“PIANJ is pleased to present this scholarship to a member of our PIA family,” said Campion Renna. “John Laux was a beloved insurance professional and New Jersey Young Insurance Professional. We are thrilled to honor his legacy in this manner.”

Website Theme by Web Themes Plus | A ThinkSEM Company